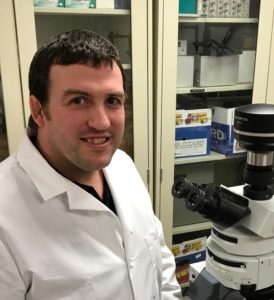 Dr Randy Stout at his lab

In this podcast our guest is Brain researcher, Neuroscientist, and Cell biologist Dr. Randy Stout.  He currently works at the NY Institute of technology. He received his PHD from the University of Alabama, Birmingham, and did post doctorate work at Einstein College of Medicine.  Currently he is studying the blood brain barrier and it’s interactions concerning brain injuries.  He is a published scientist doing “basic” research which mean he studies the workings of the brain itself at cellular levels.  This can be contrasted with studying clinical trials of drug interactions for example. His research is concerned with why the brain works as it does.   He talks about how being successful in research has some of the same elements as MMA and other combat sports.  He talks about theories on how we learn and give a few tips on how to learn better.  He also talks about how eating cbd may help brain function. He touches on managing a busy demanding schedule as in when he was an undergraduate in a difficult Ivy League Biology program while wrestling for one of the top schools in the country.

Randy can relate to our audience because he was a very good high-school wrestler, a winning wrestler at Cornell University (Top Div I program), and also has some competitive experience in boxing and jiu jitsu.  He got his blue belt from Shawn Williams in 2006. One of the reasons this conversation is important is that it give you a window into someone who grew up wrestling, boxing, and later doing jiu jitsu who has been successful in a non-related field.  There are also so practical tips that might help you in combat sports or whatever your chosen field is. Host is Warren Stout (Randy’s brother)

***** Disclaimer*****. None of the statements in this podcast should be taken as medical advice.  Randy’s statements in our causal conversation do not necessarily reflect the opinions, official or otherwise, of the institution he is employed at.  Any statements are for informational purposes only.