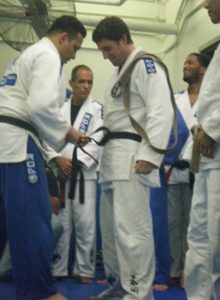 What Does the Black Belt in Jiu Jitsu Mean?

Warren Stout receding his blackbelt from Renzo Gracie in NYC in 2010.

What does it mean these days for someone to be a blackbelt in jiu jitsu? More specifically what does it mean for a teacher of jiu jitsu to be a black belt? Why is this topic important? Because there are more and more black belts out there now.  The business and social currency of jiu jitsu keeps growing.  When I started, if you had a legitimate purple belt representing a good teacher and a few years of consistent training you where unique in most places in the world.  This is not the case anymore.  As the number of new blackbelts grows there are more chances that overall quality will vary more. Social pressures and financial incentive to award belts for the wrong reasons are increasing as more and more teachers try to make a living from jiu jitsu.  New students  can’t use only the blackbelt, a simplistic symbol, as a main guide to what a teacher’s skill and character are anymore.

The following is what I believe a promotion to blackbelt SHOULD mean in its purest form.  It should mean that a widely recognized expert and competent teacher feels that a student also qualifies as an expert and competent teacher. This assessment should be based on real but also somewhat hard to define criteria.  The following are the criteria:
1. creating successful students,
2. ability to convey jiu jitsu knowledge
3. ability to  motivate
4. ability to do jiu jitsu skillfully, (competition record is one good indicator of this)

The person awarding the belt should also feel that the new black belt  has the positive character traits to represent the person awarding the belt. It can also mean that the instructor feels the person is ready to compete at the highest level.  Judgement of this should be based on a long-term relationship between student and teacher. The ambiguity of defining the qualifications above makes this point essential.

Unfortunately sometimes a blackbelt is just a status confirmed for money or friendship. My gut reaction to the idea that these elements are involved in promotion  is something like mild disgust. I want to explain why I think these element become involve. Knowing this helps me think about the meaning of belt promotions in a practical way.

Belt promotions are in one way very personal between the teacher and student.  In another way they are very public as a recognition.  When the person awarding the black belt lends his credibility to the new black-belt it is a lot of responsibility on both sides.  I felt the weight of this responsibility when I was awarded my blackbelt.  In the case that it is done in the correct spirit and for the right reasons a belt promotion is very much in line with martial arts, sport, and apprenticeship traditions.  These traditions have carried and advanced knowledge for centuries.  The case of someone looking to gain short-term financial or other benefits without considering the responsibility they have to the tradition and larger community is also a problem of not having enough “skin in the game”.  They apparently don’t feel their reputations will be affected by perverting a tradition, a symbol, for personal gain. The person awarding the belt does not feel their reputation is connected to the person receiving.  They may feel they are not answerable to knowledgeable jiu jitsu practitioners at large.  This is arrogance and disrespect to the larger community. There are a lot of pressures and it is a spectrum of how each specific case can be measured against the gold standard.   The worst part of this is when students of jiu jitsu use the blackbelt as a symbol, that is not put into context. Context should include consideration of the subjective, personal, and sometimes unfortunately transactional nature of promotion awards, in each specific blackbelt.

Why do instructors give blackbelts  for the wrong reasons? I believe the root cause is pressure from a public perception that learning from a blackbelt is better than learning from a non-blackbelt.  This assumptions makes some sense on the surface.   Since there are no widely adopted standard or hard criteria for getting a black belt it follows that all black belts are not equal.  You would expect that some brown or even purple belts may be better than some blackbelts as teachers and practitioners.  In competitions brown belts often beat blackbelts for example. Some brown belts may have been training more, longer, better than some black belts.   In addition learning jiu jitsu is a very individual activity so an instructor’s personal style can make more difference than most other factors in determining who is the best teacher for a student. A competitor who is awarded a belt to compete at the highest level may or may not be an effective teacher for every student.   Another important factor is the overall organization an instructor teaches within.  The school culture, organization, member base size, and even location can play a big role in how effective a teacher is.  Many people especially those new to jiu jitsu ONLY look at the belt to the exclusion of other, more nuanced but often more important factors.

The reaction to this as a teacher trying to make a living from a school is to feel a lot of pressure to get awarded a black belt.  There is pressure on both the person wanting to receive a belt and the person awarding it to basically exchange money for this important qualification.  An example of this is the common practice of affiliating with an established jiu jitsu team or franchise with the tacit or overt agreement to host lucrative seminars in exchange of the valuable belt recognition. Of course there are other reasons to hold seminars other than a way to pay back a belt promotion. Seminars are good team building and motivation. They support teachers who are competing or have put much work into student along the path.  It can be a way to give back to a teacher who helped you. Seminars create a different learning environment and a different way to spread knowledge as a teacher. Seminars can even help the hosting school by associating a famous person with the school.  My point is not that seminars are bad.  Much like belt promotions though there are some that are done primarily as a payment for being allowing the use of a name and belt promotion.  It is a part of a franchise agreement.  In fact some associations stipulate that seminars must be hosted on a regular schedule.

Me (Warren) and one of my main jiu jitsu influences and friend, the extraordinary teacher and jiu jitsu practitioner Shawn Williams.

The clearest cases of a belt promotion being transactional are when a teacher doesn’t  know his/her student that is promoted to blackbelt.  With regards to the belt-giver this is a pretty clear case of “selling out”; trading your principals for money.  It is generally frowned upon and I think it should be condemned more strongly than it is in the larger jiu jitsu community.  Even this situation is not black and white (pun intended).  It is more of a spectrum.  There are many cases on one side where someone joins an association, pays a fee, hosts a seminar and is awarded a belt by someone who has literally never trained with that person. On the other side there are cases of people who have shared the mats with an instructor for 15 years multiple time per week and are then promoted.  I’m personally somewhere in between these two extreme points on the spectrum. I’ve always stayed with Renzo Gracie Team since I started jiu jitsu in Brazil in 2002.  Renzo Team is a tight knit organization which in many cases is literally family.  The Renzo association does not let you just buy into becoming an affiliation if you are not a student of Renzo or his senior students.  I have lived in many different places over the past 16 years and have not always trained with the same teacher.  I even visit other non-Renzo schools sometimes.  That said I’ve always been in touch with all of my teachers and continued to train with all of them at least occasionally. Most of the main BJJ teachers that have taught, trained and influenced me where at the presentation of my black belt by Renzo Gracie in 2010 in New York City.  These include:
1. My first BJJ teacher, Rolles Gracie
2.  The person I consider my biggest Jiu Jitsu influence, Shawn Williams
3.  My longtime mentor/coach, Daniel Gracie
4. Another big influence, John Danaher
One that was missing is Mauro Sergio (Ryan Gracie Black Belt)  who I trained with while living in Costa Rica.  Also many of my training partners who have helped me over the years including Pittsburgh students, Costa Rican teammates and some from NYC and Los Angeles where present. I remember the day that Renzo awarded me the belt I had some tough rolls in John Danaher’s class and then Shawn Williams beat me up for about 20 minutes before everyone started filing in for the belt presentation award. I have not trained extensively with Renzo himself although I have trained with him, socialized many times outside the school,  and taken several classes taught by him.  There are two points I want to make with my personal story.  First is that I think  my path is an example of an black belt awarded on the legitimate side of the spectrum.  Second is that each case is different so that you have to know some details of an instructor’s story to really evaluate what the black belt means in each specific case.  In my case, my teachers including Renzo felt I qualified. They felt the head of the schools, Renzo Gracie, should be the one to present the belt.

Awarding a blackbelt based on personal friendship also sometimes happens.  This is less repugnant than a  case of buying a rank but also not correct.  Liking a  student’s personality does not make the student automatically an expert in jiu jitsu. Being a good drinking buddy to a great jiu jitsu teacher doesn’t make the drinking buddy great at jiu jitsu!  Again this is a nuanced situation that is different for each specific case.

In the context of competition and certain other organizational matters belt rank can be helpful. It can act as a good progress measure and a motivating factor.  The problems arise when it is used as a symbol, that is not put into a context that includes consideration of the subjective, personal, and sometimes unfortunately, transactional nature of promotion awards. My main goal for this blog is to change how the public and in particular new students see the blackbelt.  I hope that this provides a little bit of perspective on the limits of the symbolic idea of BlackBelt.  In addition I hope it helps new students look beyond simplistic ideas and make a good decision on where and who to train jiu jitsu with.